Attention Board Members! There will be a Board Meeting held at 12:00 noon this Sunday July 19th at the ProNyne Motorsports Museum , 8 Cleveland St.,Pawtucket, R.I. Subjects will include the last 3 months of business we’ve missed , The HOF Truck, the next Newsletter, and the HOF Banquet. Please bring any support documentation needed and any questions /concerns to Rich at (860)209-7343 or rgoucher@comcast.net. Rich is buying pizza for lunch for everybody, FYI. Cold soft drinks will also be available.

Good Morning all! Unfortunately, due to the rain in the forecast for late afternoon, and early evening, and high humidity, we have decided to postpone today’s events.

Danbury RaceArena Reunion Night has been rescheduled to August 22nd.

We regret that this information is not timely. We just heard that Dick had passed late last week.

WINDHAM – Robert “Dick” Wolstenhulme, 10-time Beech Ridge Champion, racing “Iron-Man” and legendary “hub-cap” man, 87, passed away June 14, 2020 on his 63rd wedding anniversary at Mercy Hospital. He was born Oct. 8, 1932, a son of John “Fred” and Lillian (McPherson) Wolstenhulme Sr. He grew up in Windham, working alongside his father in the shop he built, which Dick continued on after his father’s passing.

On June 14, 1957, he married Phyllis Howard. The two made their home in Windham, which has developed as a landmark for all who visit the town. Anyone who knows Dick is familiar with his thousands of shiny hubcaps he proudly displays at his shop. He had a love for “picking” particularly hub caps.In addition to his unique collection of hub-caps, Dick was a 10-time Champion at Beech Ridge Motor Speedway in Scarborough, in both classes, the late model and super-modified. Known as the “Iron Man from Windham” he proudly drove #99; his love for racing was instilled in his whole family and Beech Ridge was their second home. Dick was inducted in the inaugural class of the Maine Motorsports Hall of Fame. Dick also was inducted into The NEAR Hall of Fame in 2006.

A character in his own right, Dick was an unforgettable man who loved his family above all else. His bond with his daughter Barbara was unmeasurable and he was known as “Ganky” to his beloved granddaughter, Janice and great-grandkids Sawyer and Bennett who were the apples of his eye. Although he leaves a legacy of hub-caps and racing, he will be remembered for his salt of the earth qualities. When asked during an interview what life lessons Dick learned he responded, “Be good to people. Forgive them. Bite your tongue! If you can’t say nothing good, don’t say nothing.”

Dick’s funeral service was held on Saturday, June 27 at 4 p.m. at Beech Ridge Motor Speedway, Scarborough. To express condolences or participate in Dick’s online tribute, please visit http://www.DolbyBlaisSegee.com. In lieu of flowers, memorial contributions in Dick’s name may be made to the Maine Vintage Racecar Association, 6 Lookout Drive, Windham, ME 04062

Hello members!!! We finally have some good news! Our first running event this year is scheduled for Sat. July 11th at Bethel Speedway in White Lake, N.Y. This will be the annual “Remembering Danbury Night” featuring the Ev Pierce Memorial Race !
All member cars get two free passes, must have paid up dues. Membership Forms will be available from Rich Goucher at the Speedway. Format will be practice, 10 lap heats, and a 15 or 20 lap feature depending on attendance. Pit gate opens at 3:00 p.m.

We will announce other 2020 events later this week as we firm up plans with the venues.
Please contact Rich at 860-209-7343 if attending(or with any questions) so we can plan on a group area in the pits. Please come support this first event to be held with all safety protocols(masks) and social distancing.

The NASCAR Hall of Fame announced Tuesday its three inductees for the Class of 2021, with Dale Earnhardt Jr., Mike Stefanik and Red Farmer set for enshrinement next winter.

The three-member class was the first elected under new voting rules, with nominees divided into Modern Era and Pioneer Era groups. Two were chosen from a field of 10 Modern Era nominees, and one was selected from a group of five on the Pioneer Era ballot for legends whose careers began more than 60 years ago.

Earnhardt — a two-time Daytona 500 winner who was chosen as NASCAR’s Most Popular Driver 15 times — led all nominees with 76 percent of the vote, winning induction on his first year on the ballot. Stefanik — a nine-time champion in Modified and Busch North (now ARCA East) competition — was the other Modern Era selection, appearing on 49 percent of ballots cast in his seventh year of eligibility. Ricky Rudd and Neil Bonnett were the next top vote-getters in the Modern Era category.

Farmer, a founding member of the Alabama Gang and a four-time regional champion in NASCAR’s early days, topped the Pioneer Era list with 71 percent of the vote. Hershel McGriff and Banjo Matthews were the next-highest candidates receiving votes. 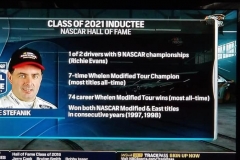 The scheduled event for Thunder Road in Barre, Vt.(Friday June 12th, 2020) has been cancelled due to Covid 19 restrictions for gathering size. If the event can be re-scheduled we will let our membership know. 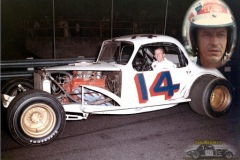 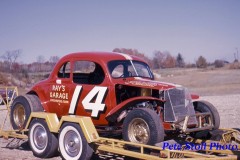