Robert L. Judkins Sr, age 83, beloved husband of Angela M. (Gorneau) Judkins, died on Thursday, October 25, 2018, at Apple Rehab Center in Middletown, CT after a lengthy illness. He was born in South Paris, Maine on September 12, 1935, he was the son of the late Herman and Eva (Learned) Judkins. He had resided in Meriden, CT and in Edgewater, FL, returning to Connecticut in 2017.

Mr. Judkins was the owner and operator of Judkins Garage in Berlin, CT. Bob was a proud veteran of the U.S. Army, having served from July 1958 to July 1960. Bob was most notable for his on-the-track achievements in the New England area, running the famed number 2x modified race car. In the sixties, Judkin’s ’37 Ford Coupe dominated the track with drivers Jerry Wheeler, Tony Mordino, Billy Harmon, Mario “Fats” Caruso, Rene Charland, Gene Bergin, Kenny Shoemaker and legendary driver Ed Flemke. Then in 1971, Judkins introduced a new style of race car, hanging a Ford Pinto body on the famous 2x. Stafford Motor Speedway’s Jack Arute tried to convince NASCAR to allow the 2x to run, telling Bill France, Sr that the new body style was the “future of racing”. Once cleared by NASCAR, the Judkins 2x Pinto Revolution began. In the seventies, eighties and nineties, Judkins continued to compete and took the famed 2x into victory lane. Drivers Ed Flemke, Ron Bouchard, Reggie Ruggerio, Brett Bodine, Jerry Marquis – with three consecutive track championships at Riverside Park Speedway – and Dave Caruso helmed the 2x. In Bob’s fifth decade of fielding a race car, Judkins continued to be highly competitive and won track championships at both the Orlando Speedworld and New Smyrna Speedway with driver Jason Boyd. However, Bob’s last win in 2009 would be one he would not forget, when his grandson Ryan Preece took his famed 2x into victory lane to complete Bob’s illustrious racing career. Bob was inducted in N.E.A.R (New England Auto Racers) Class of 2003 Hall of Fame.

A celebration of life service will be held on Thursday, November 1, 2018 at 7:30 p.m. at the John J. Ferry & Sons Funeral Home, 88 East Main St., Meriden, CT 06450. Family and friends may call at the funeral home prior to the service from 3:30 to 7:30. Burial will follow at a later date. For online condolences and directions, please visit jferryfh.com. 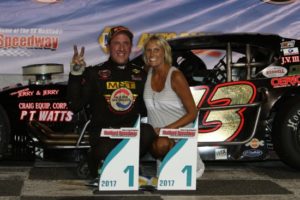 Tickets for the 2018 NEAR Hall of Fame Banquet  on Sunday, Nov. 11, 2018 are selling briskly. With Ted Christopher and Mike Stefanik leading a fine group into the Hall, friends, family, and fans want to be there to see the induction.

Jump on board and get yours now! Also available for promoting your business or team is the Hall of Fame Program, with very reasonable rates. See below for the links to download  both forms. See you at the banquet!!!!