The NEAR Mobile Hall of Fame Museum
operates on donations. 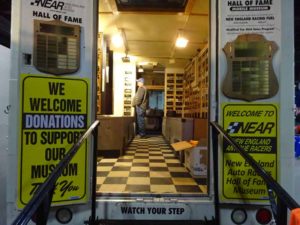 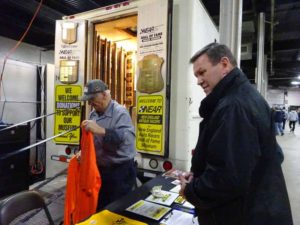 The New England Auto Racers Hall of Fame Mobile Museum has been recognized by Independent Motors in Boulder, Colorado, as one of “25 of the World’s Best Motorsports Museums”!!!

To be included in a list that includes, to name a few:

is amazing; this list reads as a “Who’s Who” in motorsports museums!!

The NEAR mobile museum, which operates on donations, travels to New England events with the New England Antique Racers Club (NEAR) featuring a visual history of New England automobile racing.

Back in 1997, NEAR members began the hard work to establish the NEAR Hall of Fame; the first Hall of Fame in New England for auto racing. The first induction of twelve race legends was held on February 1, 1998, in West Springfield, Massachusetts. Since then, we have inducted 207 individuals into the New England Auto Racers Hall of Fame, which is administered by the New England Antique Racers.

The mobile museum allows the club to continue their efforts in the preservation of New England racing by sharing the history of the Hall of Famers (track owners, promoters, publicists, drivers, car owners and engine builders who have made contributions to the racing sport); as well as display several rare memorabilia items representing decades of auto racing history throughout the region. Click here to check out a few pictures of the mobile museum.

It is truly an honor to be included with these incredible museums from all over the world!!