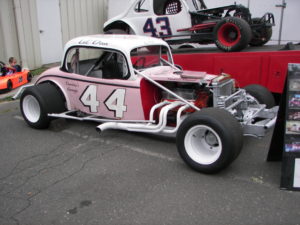 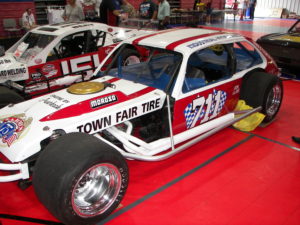 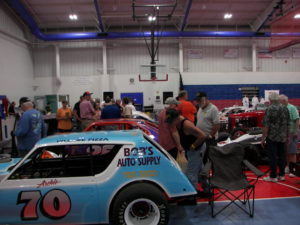 September 17, 2017 found the New England Antique Racers at the P.A.L. building  for the annual  Danbury  SNYRA  Reunion.  This always popular show brought out the crowd, even though the morning started out with clouds, mist,  and fog. By noon, the weather had cleared and we were in a summer sweat down.  Fortunately, this event is inside. The  hot weather had little impact on those shining up their cars. They all displayed well and  received the admiration of the masses.

In addition to the cars, the Hall of Fame Museum was also in attendance. This traveling catalog of racing memorabilia was, as always, a hit with those who toured.

It is hard to believe that after 36 years race fans still come out to view the cars, and obtain autographs from their drivers.  Many  take pictures of cars which now only race in their memory. Some are still on the track at vintage events where some tracks allow  NEAR to participate. These are demonstrations. not at top speed and racing, as set forth in our bylaws. If you have not been to a facility where NEAR actively takes to the track, you have missed the sounds of open exhaust, the smell of rubber being ground into the track, and the scent of hot oil. The 2018 schedule is under construction as this is being written.  Please  check the website and make plans to support NEAR at a local race track. Come show your support for the facilities, and the members who do this as a labor of love for the sport.

Also for the fan’s viewing delight were late models, modifieds, dirt cars and go karts from the surrounding area.   They all came out to support the reunion. Outside the facility a good number of street vehicles made the trek to strut their stuff for the pleasure of the attendees.

On behalf of NEAR and the Danbury Racearena Reunion Committee,  I would like to thank  the following:  Don Moon, George Cleveland, Don Lajoie, Pete Ballard, Dale Cote, Bill Kemp, Jojo Farrone and Angie Bullock.  Your efforts were paramount to making  the show happen by bringing  your  cars and donating  your time. Much appreciated.

A big tip of the hat goes to Steve Zukowski.  Steve drove  the HOF truck from Rhode Island to Danbury and back so that it was available to the fans.

On to The Plainville Reunion!