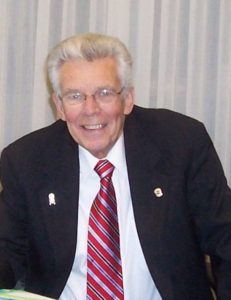 Kendall embodied the essence of these inspirational words; “A Winner Never Quits and a Quitter Never Wins …” one of his cherished quotes. He used them often to motivate anyone that needed encouragement. In fact, many of Mr. Smith’s quotes are embedded in this tribute fallowing his passing caused by respiratory disease.

Born in Haverhill, MA, February 16, 1939, the only son of the late Clifton and Gertrude Smith, he was predeceased by his younger sister Susan Craig (Smith) Silva (1998). Raised in Groveland, MA, by his single mother, Ken had to quickly learn the importance of hard work at an early age, to help provide for his mother and sister. This set the stage for a life of determination, perseverance and generosity; and he never quit. It was this winning and encouraging spirit that touched so many lives. Mr. Smith and his family resided in Kingston, NH for the past forty years.

After earning an Associate’s Degree in 1958 from Bentley School of Accounting in Boston. Mr. Smith began his 52-year banking career at the former Merrimack Valley National Bank, in Andover, MA. Starting in the basement floor, processing checks by hand in the Proof Department, his hard work ethic didn’t let him down as he rose through the ranks. When the bank became Bay Bank Merrimack Valley, Mr. Smith was appointed Vice President until 1982, when he was hired by Granite State Bank in Somersworth, NH, as its Vice President. On March 5, 1984, Mr. Smith was hired as Executive Vice President of the Pentucket Bank in Haverhill, MA, where he would work for the next 26 years. He was brought to the bank by then-President Ed Cote, who started his career on the very same day with Ken in 1958.

Mr. Smith went on to become the President of Pentucket Bank, Chief Executive Officer and Director of the Board of Investment. Under his leadership, Pentucket Bank grew to become Greater Haverhill’s leading financial institution, owning the largest market share in the region. Pentucket Bank continuously earned a 5-Star superior rating from Bauer-Financial, Inc., the nation’s independent banking research firm. Mr. Smith retired as President and Chief Executive Officer in June of 2010. He continued serving as Chairman of the Board, Trustee, Corporator and Advisor.

One of Ken’s favorite quotes was this; “Some people think it’s nice to be important, but I think it’s important to be nice.”

Kindness, loyalty and generosity were the very fiber of Ken’s character, which started at a young age. Mr. Smith’s volunteer time and charitable contributions benefitted numerous charities throughout the Greater Haverhill Community.

His many honors and awards recognized selfless acts serving the needs of people from various ages and all walks of life. Kendall, and his wife, voluntarily served as the Sanborn Regional School Treasurer for over 25 years (1969-1994). In 1999, he was chosen Salvation Army’s, ‘Man of the Year.’ The following year, Mr. Smith was honored with the American Red Cross ‘McCallum Humanitarian Award’ given to individuals whose efforts make our community a better place to live and work. Ken lived by The Boy Scout Motto: Be prepared; Do your duty; and Do a good turn daily. Perhaps this helped him earn the Boy Scouts of America, “Distinguished Citizen Award” in 2002.

During 2003-2004, Mr. Smith was the Haverhill Rotary President, under which he led a fundraising drive to build a stone sign for Winnekenni Castle. For these efforts, he earned the “Paul Harris Fellow Award” presented by The Rotary Club to a member who has contributed selflessly for the betterment of their community. In 2005, The Greater Haverhill Chamber of Commerce presented Mr. Smith with the “Business Person of the Year” award.

Along with Pentucket Bank, Kendall was a yearly participant and financiaJ donor to Haverhill’s annual VFW Santa Parade as well as an on-site participant in the Haverhill Gazette Santa Fund ‘Hole-In-One’ event. Mr. Smith was on the Board of the Veterans North East Outreach of Haverhill, MA. He was awarded the Liberty Bell Plaque in 2010, annually given by Haverhill’ s Bar Association to a “non-lawyer in recognition for service to the community.” He was a member of the NECCO Foundation Board and participated in the Mayor’s Breakfast. He was an Advisory Board Member of the Greater Haverhill Foundation, Inc. and contributing member of the Groveland Historical Society. Mr. Smith made numerous radio appearances over WHAV on the “Open Mike Show” with Tim Coco, discussing racing, banking and history of his beloved Greater Haverhill.

When Nothing Goes Right…Go Left

A lifelong passion for auto racing eventually landed Ken in the New England Racing Hall of Fame in 2006. He devoted much of his life to racing. Starting once again from the bottom up, he sold popcorn and programs at The Pines Speedway. He was a soap box derby champion in Groveland and even drove cars in the woods behind his house. He had a brief race driving career and wrote his own racing column for The Haverhill Gazette.

It was in these early years where Ken became a devoted fan of the late racing legend Ollie Silva, also a racing Hall-of-Famer. He developed a friendship with Silva and was best man when Silva married Ken’s sister, Susan, in 1972.

Ken’s zest for racing led him to join dear friend and colleague, Russ Conway, of Haverhill, MA, as well as the late Charlie Elliott. Together with car-owners and drivers, they formed the New England Super-Modified Racing Association (NESMRA) in 1965. Ken was its only General Manager and guided the group to become a highly recognized racing organization. The group traveled from Halifax, Nova Scotia, to Hialeah, FL, operating over 1,000 racing events and over 10,000 actual races between 1965-1999. Over the years, NESMRA paid out more than $6 million in prize money.

Cars with Flames go Faster than Cars Without

Among the “Home” speedways that Ken and NESMRA operated were; Star Speedway, Epping, NH; Lee Raceway, Lee, NH; Hudson Speedway, Hudson, NH, Lee USA Speedway, Lee, NH, and Canaan Fairgrounds Speedway, Canaan, NH. Along the way, his wife and kids would support him whether it be selling in the ticket booth, or taking tickets at the gate. Eventually, Ken managed to turn a few of his
grandchildren onto to the sport as well. NESMRA operated numerous car shows as well as snowmobile races, concerts and boxing events. Mr. Smith was co-founder of the Florida Winter National Series, Yankee All-Star League for Modifieds, the Canadian Super-Modified Tour. In 1970, NESMRA reorganized the annual “World Series of Speedway Racing” with Thompson Speedway owner, Don Hoenig.

Each year, Ken was a highly passionate, active organizer and donor to the annual Pines Speedway Reunion in Groveland, MA. He participated as a Selection Committee Member and this past October was elected as an Honoree himself. Ken was a long-time member of the New England Auto Racers Inc., and the Senior Tour Auto Racers.

Mr. Smith was a founding member, major contributor, Treasurer and Executive Board Member of the North East Motorsports Museum, a new 10,000-square foot home for historical race cars, memorabilia and decades of racing history. The building is located at the New Hampshire Motor Speedway, in Loudon, NH. Opening ceremonies for this special museum will be in June, 2017.

A Fun Way of Life

“That’s the trouble with the world, too many people grow up…” -Walt Disney’s line was another Ken favorite. Mr. Smith adored children. He was never shy to tell an animated story that he would make up on the spot. Children would gather around and be mesmerized by his voices and tales that often included their names.

A well known love of Ken’s was the magic of Mickey Mouse and Disney. Arriving with his wife and children at Walt Disney World the first year it opened in 1972, Ken was fascinated with that wonderment started by just a mouse, a dream and an imagination. From that time forward, Ken had an affection and passion for anything Disney.

Visiting Disney World numerous times over the years with his wife and family, wearing Mickey Mouse lapel pins on his business suits on a daily basis. He purchased two six-foot stuffed Mickey and Minnie Mouse figures that sat in his Pentucket Bank President’s office. He would be seen wearing oversized white gloves with three fingers, just like Mickey. While participating in many local parades, Ken would decorate his 1974 Corvette, pump up the music and wear a Mickey Mouse costume while his teen-aged children, their friends, other family, bank or racing helpers volunteered to wear many other Disney costumes.

Mr. Smith believed education opened the doors to people of all backgrounds. He considered the key to success was education and placed a high value on it. Mr. Smith often said that if he did not pursue a career in banking, he would have liked to have been a teacher. In fact, his mother, sister and daughter all worked for school systems in Greater Haverhill. Mr. Smith frequently invited the school children of Haverhill to take field trips to Pentucket Bank to learn the importance about money and savings. He often treated classes to lunch after touring the famous Pentucket Bank Vault. In April 2006, The Haverhill Foundation for Excellence in Education held, ” An Evening to Roast and Toast Ken Smith,” as a fundraiser, with 300 people in attendance.

Family time often included sound advice to the youngest of ears that were listening to Ken. He never missed an opportunity to instill a value to his children, grandchildren or any young face that was listening.

For 51 years, Ken and Evelyn took their family to their annual beach retreat at Jenness Beach, Rye, NH. Ken was affectionately known as the Mayor of Jenness Beach, where he sat atop his ocean-front perch. Friends and beach-goers would find a smiling pal with quick wit and humor. He would share his many stories, quotes, jokes, lessons learned, business facts, racing statistics, open-minded knowledge, opinion and lectures. He treated everyone he met fairly, with respect and with an open mind. He believed, no matter how educated, talented, wealthy or cool you were, how you treat people tells everything about your integrity.

Do Great Things …But Stay Humble

Mr. Smith was a proud man. Proud of his devoted family, his dedicated employees of the Pentucket Bank, his loyal racing peers and fans, his charitable colleagues and faithful friends. Whether he was making good turns daily on the track of life or making left-hand turns on the race track, Kendall personified a larger than life, magnetic character to all that knew, admired, loved and adored him.

A Celebration of Life will be held Wednesday, June 7, 2017 between 4-8 pm at DiBurro’s Function Facility in Ward Hill, MA.

In lieu of flowers, memorial contributions in Mr. Smith’s honor, may be made to the following: