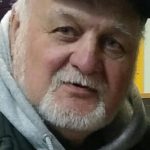 The loss of Val LeSieur is going to rock a lot of racing people in the Northeast, and indeed up and down the East Coast. Across several decades he published Speedway Scene, which had to be the liveliest trade paper ever printed. It carried news and opinion, it infuriated the occasional track operator, it ran semi-regular pages of goofy photos and captions, and it tied together a region full of readers who considered it a bible. In my early teens I was one of those kids, buying the paper for 50 cents at Plainville Stadium, seven or eight miles from my home in Connecticut. Later I wrote columns for Val, and by age 18 I’d moved to Massachusetts to work for him full-time, cranking out a 48-page (later 56-page) paper on gallons of coffee, snacks, and at least one all-nighter a week. Every Monday-Wednesday it bordered on torture, but, looking back, it was a joy. I worked for Val in various editorial positions (and essentially lived with his family part-time) from mid-1979 through most of ’88, except for a very brief stint in 1983 when I mistakenly thought civilian life looked appealing. Among those who wrote for Speedway Scene in those years were Pete Zanardi, Buffy Swanson, Dave Moody, Phil Smith, Kevin Eckert, Bob Echo, Toodi Gelinas, Mark Thomas, Jack Flowers, Don and Joanne Davies, Charlie Langois, Gary Grim, John Brouwer and Dave Shippee, Kraze Korlacki, Bob Morris, and many more. Together with Bob Echo, Val created the annual Racearama trade show that, truth be known, was one of racing’s biggest parties. He and I ran up and down the road probably hundreds of times, to Martinsville, Daytona, Oswego, Syracuse, Islip, Pocono, and countless other tracks. It was my honor, back in 2011, to induct him into the New England Auto Racers (NEAR) Hall of Fame, as pictured. Val never had a dull moment, and to be in his orbit was to laugh a lot, yell a little, and move on to the next adventure. My heart goes out to his daughter, Valerie, who has known too much sadness. But, for a minute, let’s think of him and smile. He always signed letters, “Your pal Val,” and he wasn’t kidding. He was everybody’s pal. — Bones